The socialization project was learning how we are socialized negatively and positively. During this we made two things; a mask and essay. The essay was about how we have been socialized  the most from the identity categories; these are race, gender, sexualization, religion, ability, social class and age. Then we made a mask to visualy represent the ways we have been socialized. The main thing I will get out of it is learning to understand others and not to stereotype. 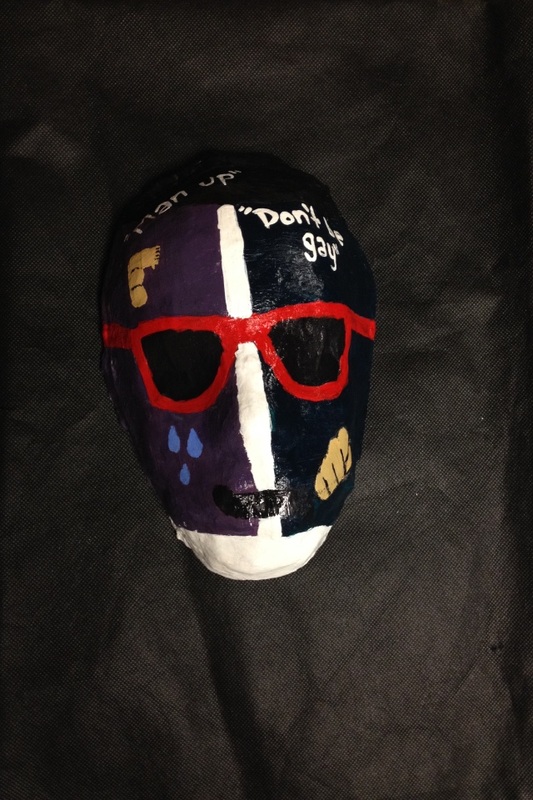 Socialization is the way you have been made by your culture and or society, it shapes you through your whole life and can be positive or negative. These are how you are influenced by socialization: sports, peers, religion, media, and family. The identity categories are how you are labeled.  Within that there are two categories you are put into: targets and agents. Agents are the dominants and targets are the nondominant, for example white is the dominant and any other race would be the target. Some socialization you don't have a choice and are born into for example, race, gender and social class. In “The Cycle of Socialization” Bobbie Harro states “The results of this inventory make up the mosaic of social identities that shape(s) our socialization.” Some things that I have been socialized to think are being strong, to not be “gay”/ not being like a girl, and in my experience white privilege.

Through my life I have been socialized to think guys are supposed to be strong. Some of the stereotypes and characteristics of the “ideal guy” are no weakness, no fear, protector, strong, has “balls”, not to be like girls, not to be “gay” and to be athletic. I have had friends over the years telling me “don't be gay” or “shake it off.”An example is by Tony Porter “A call to men”. In it he tells about his brother,16 year old who has a trajec death. The father doesn't cry through the whole funeral, and on the way back everyone gets out of the car until its just father and his son. The father immediately starts balling. In Tony Porter’s Ted Talk “A Call to Men” he states, “He didn't want cry in front of me, but he knew he wasn't going to make it back to the city, and it was better me than to allow himself to express these feelings and emotions in front of the women.” He didn't want the women and other people to see him cry, because that's not what the “ideal guy” does. He then starts amending his son for not crying there and then starts apologizing to him. This is not just a recent thing. This has been going on forever. “The Man Box” is something all guys are confined to do and think. It talks about how guys are limited and have to be just like this or they aren't a guy. These are some of the confinements, Don't be like a woman,  tough and athletic, doesn't show fear. In it a guy asks a boy on a football team, what would he would think if the coach told the boy in front of his whole team that he was playing like a girl. The boy responded “It would destroy me”. Its terrible that someone would care enough about what his friends say that it would “destroy him”. Its sad that that's what kids are valuing while they grow up. When I was doing sports while I was younger I was taught to be tougher than the guy on the other team. This has socialized me to try and not cry in tough situations and also to be strong. When I get hurt I just play it cool and pretend like I can't feel it, when really it hurts terribly, which I'm forced to keep in.  In our world men are supposed to be strong not weak.

I have been socialized to think men can't show a girl side otherwise you are called gay. In “My princess boy” it talks about a boy who loves dresses and wears them all the time everywhere. At school when parents come to pick up their kid they jump to assumptions to think he is homosexual. The first thing in the video the boy states “It makes me feel happy.” Guys are made fun of, called names and criticized if they were to do this in our culture. This is the society we live in. What I ask myself is why? Why can't guys express their feelings even if its female? Girls do all the time. For example my teacher Sarah was telling us that when she was in high school and she would have kinda a rough night/day that she would go to her friends and talk about her night and just would get support from them. This is a great environment and privilege to have. Guys can't do this in our society. They keep it all to themselves. Another example is in Jennifer Newsom’s “The Mask You Live In” she points out that “We have constructed an idea of masculinity in the US that doesn't give young boys a way to feel secure in their masculinity, so we make them go prove it all the time.” “The Mask You Live In” Ashanti Branch has a group of boys sit down in a circle and gives them all a sheet of paper, “I want you to write what it is you don't let people see. Almost ninety percent of you said pain and anger” Guys need to start learning to find a friend that they can sit down with and talk about what's going on in their life, old ,young, anyone. Or sooner or later were all going to go crazy.

Whites do not recognize their privilege. Before starting this unit I never realized the difference of privileges between blacks, Hispanics and whites. In the article “The Invisible Knapsack” by Peggy McIntosh It states over 45 examples about race differences. Blacks and hispanics are more likely to experience hostility, distress, violence and harassment. Some of the ones that stood out to me the most are: 1. If I should need to move, I can be pretty sure of renting or purchasing housing in an area which I can afford and in which I would want to live. 2. I can be pretty sure that my neighbors in such a location will be neutral or pleasant to me. 3. I can go shopping alone most of the time, pretty well assured that I will not be followed or harassed. 4. When I am told about our national heritage or about "civilization," I am shown that people of my color made it what it is. 5. I can turn on the television or open to the front page of the paper and see people of my race widely represented.  These were in the first ten examples and before reading this even you could not have realized it. These are just five of many examples of how whites are oblivious to their privilege. I being white have never had a problem with any of these. I have never been followed out of any store. I have never experienced being harassed because of my race. I have been socialized to learn mainly about white history. My life would be immensely different if I had grown up a different race. Reading the article it really changed my perspective on how lucky I am to be white. Whites are the dominant race, many people who aren't white wish they were.  This can also relate to the power that men have around the world over women on a daily basis. And many don't realize it. You don't know what you have until its gone. We don't realize it but other races have it harder than we do.

The question that has been hassling me the most is, how can we all as individuals stop the negative cycles of socialization? It is very important we fix this. A lot of it has to do with how kind you are to others. So next time you see a guy in a flamboyant outfit or maybe “gay” looking. Don't say anything or compliment him. It may be the only nice thing he will hear all day. Also learn to treat other races with respect. It’s probably not as easy as you would think for them. After all in “A Call To Men” by Tony Porter he says “I remember asking a nine-year-old boy, “What would life be like for you, if you didn't have to adhere to this man box?” He said to me, ‘I would be free.’”

The symbols for my mask mean and are the following: I have a bicep muscle to show guys have to show strength, sunglasses on to show how many guys put their emotions behind them and don't express or talk about them tears coming out of one side of the glasses to show guys are feeling pain and anger, one side of the mouth is going up to show guys being happy other side is down to show sadness, divided into green and purple (my favorite colors) to show “guy and girl colors,”at the bottom and top I will have white and black to show equality between them and how we should not treat them different as we would white people, on the forehead are statements made to guys. Be a man, Grow a pair, Don't be gay, fist to show guys going to prove their masculinity.

The sunglasses and what they represent. I'm most proud about this because it is the main piece. It shows how guys put away all their emotions and play it cool hints the sunglasses. But there are tears coming out one side to show what guys actually feel. I find this very true in mine and in others lives.

I will remember to be more compassionate and understanding of other people and where they may be coming from and also not to judge people. After looking and hearing about peoples masks and what they represent it shows you how not just one person has problems going on.  Everyone does in their life, and its things they don't want to tell others. So if I can make it a little easier by not commenting, making assumptions or judging it just might make them  feel better and do the same to someone else.


Advocacy. I am going to talk about this in my SLC about a HoHam that I could work on. I need to ask you/ peers about what's going on instead of assuming I know what I'm doing. Then getting it wrong and having to do it over again. This turns out to be a big waste of time. I'm better off to listen twice and do once.