Q1: What has been the work you are most proud of in this unit?
I am most proud of my Pow 2 Slices of Pie. I'm proud of this because I did really good on it and was able to finish it pretty quick. I got a 25/25 and got it put on Caitlyns wall of beautiful work. I also did this by myself so I didn't have a partner help me.

Q2: What skills are you developing in geometry/math?  Skills can be applied across mathematics – think graphing, creating tables, creating diagrams or mathematical models, approaching problems in different ways (by testing cases, by testing extreme examples, by setting up a table initiating/approaching hard problems, e), or learning how to use your graphing calculator to fit equations to data.
One of the biggest and coolest things I have learned this semester is trigonometry. Not only have I pretty much mastered it but I have learned cool tricks in it. The most helpful thing I have learned in it is how find the distance of how far you are from something. You can use 3 different equations for this and theirs many scenarios where this can help you if you have a clinometer. This is definitely something I will use in the future.

Q3: Choose one topic: similarity (ratios) or trigonometry.  Explain what it is.  Provide an example of how it is used in mathematics to solve problems.  State an application of the topic in the adult world (i.e. scaled replicas of sculptures, scaled models for architecture, trigonometry in construction or blood splatter analysis, etc).
Trigonometry, is the branch of mathematics dealing with the relations of the sides and angles of triangles and with the relevant functions of any angles. One problem relevant to this is as follows; Woody is 12 feet from a tree, Woody's line of sight to the top of the tree is at an angle of 70 degrees up from horizontal, Woody's eyes are 5 feet off the ground What is the height of the tree? You then can use trigonometry to solve this.

Problems of the week:

Problem of the Week Reflection:  How have problems of the week helped you grow mathematically?  (Communicate ideas, breakdown problems, organize information, develop a growth mindset around mathematics)
The POW's have helped me because they give me the opportunity to think and do work on my own. Also they help me learn new concepts that we may have not yet learned.

Here are my best Pows:


Problem Statement: What are the maximum pieces of pie you can get from a certain number of cuts? In this problem you have a circle and you can cut it anywhere as long as its a straight line.


When we were given this POW I immediately jumped in on it and got to work. After I read through the POW sheet I wasn't totally positive on what it was asking so I asked Caitlyn and she helped me understand it. I then read through the table and and used the circles they had already made on the sheet and used that to put the 4th and 5th line on. The picture they used was very helpful and I was able to figure out the pattern in the first day. I wrote down my results and studied it to find a pattern. I looked at what the difference was between the outputs and I found the pattern. I collaborated with my friend Will because he thought the max was different then what I did. After doing a couple drawings and showing him the pattern he was on the same page and found it out to. The main reason I was able to get the pattern equation was that Caitlyn helped me out by explaining that you would need to graph this data. I then looked up graphing calculators but none of them seemed to work. In them you had to put in the equation in first and it would give you points (The opposite of what I needed. I will talk about this again in solution). You can look on the POW sheet and find where I used the circles they already had given me, which lead me to the solution rather quickly.

(Use the picture at the end for this section)


During this and before I totally understood what the question was, in my head I thought that it was gonna give us a certain amount of pieces and we had to find the max and the min number of slices that you could do to make it. Leading to the extension; I wonder if you could think of a POW similar to this one that would be like that. Say if you were told you need to find out what is the maximum and minimum number of slices it take to make 33 pieces. I think this would be an interesting easier byproduct of this POW.


My reaction to this POW was that I surprisingly liked this one. I'm not sure if it was less difficult than past POWs or what you were doing in it. But I found this one much more entertaining than past POWs by a long shot. In this I learned how to use a graphing calculator and became more familiar with it because I had never used one before. Also I learned a little about quadratic formula which was used in this. I don't like saying it but this POW was kind of easy, which could have been why I liked it more than most. I would give myself a 24/25 on this POW.

Use this for the table. It corresponds with the paragraph below the one where I mention this table. 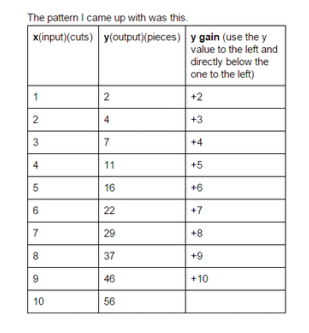 Here is my work for this POW 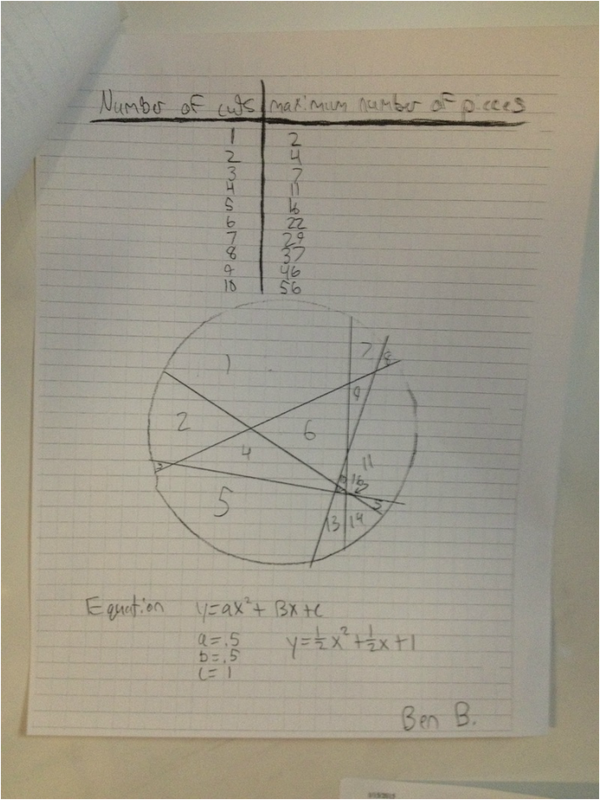 The problem statement for this POW was: On a 3x3 chess with knight chess pieces in each corner (on the top is black bottom is white) can the two colors switch spots with each other?

My process to trying the problem was try and fail methods. I started just moving them in random places trying to see if it would work. I found this a long process without success, most of my attempts I gave up on, because they looked too far gone. I tried to think of a mathematical way to solve this with no luck. On one of my attempts I noticed something. As I started off with another try I noticed that in 8 moves I was able to rotate each chess piece 90o. So I thought about what we had been learning in math class which was rotations and translations. If I had rotated it 90o then I should be easily able to again.


This was the solution I found to the problem. With a total of 16 moves, 4 per piece. I rotated the pieces a total of 180o. This is correct because the knights switch places without ever being on the same square as each other, therefore relieving them of boredom. An extension I thought about was incorporating things we have learned into this. I thought about how I could put order of rotation and angle of rotation in this. I found this: Angle of rotation 180o and the order of rotation two. Obviously it didn't take two moves to get it there in the way I did it. But when you think just about rotating the board not the pieces it works.


In the problem I learned to keep trying and think if this problem could have something that relates to what we are learning/learned in class. Also just to keep trying and look over your past try’s carefully to see if you notice anything that could help in making the next one.


I think I deserve a 27/30. I got the problem write and I’m proud of my write up. I don't deserve the extra 3 points because I didn't work on scratch paper and made my work messy and kinda confusing.


This is my work for this POW: 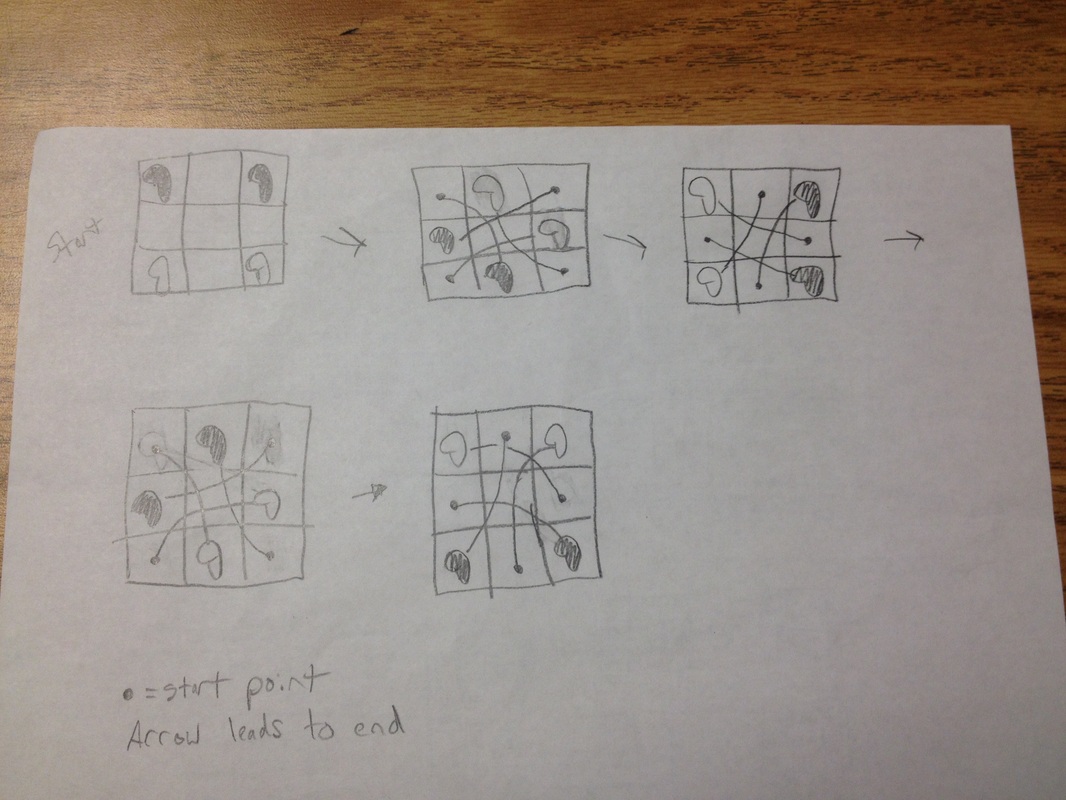 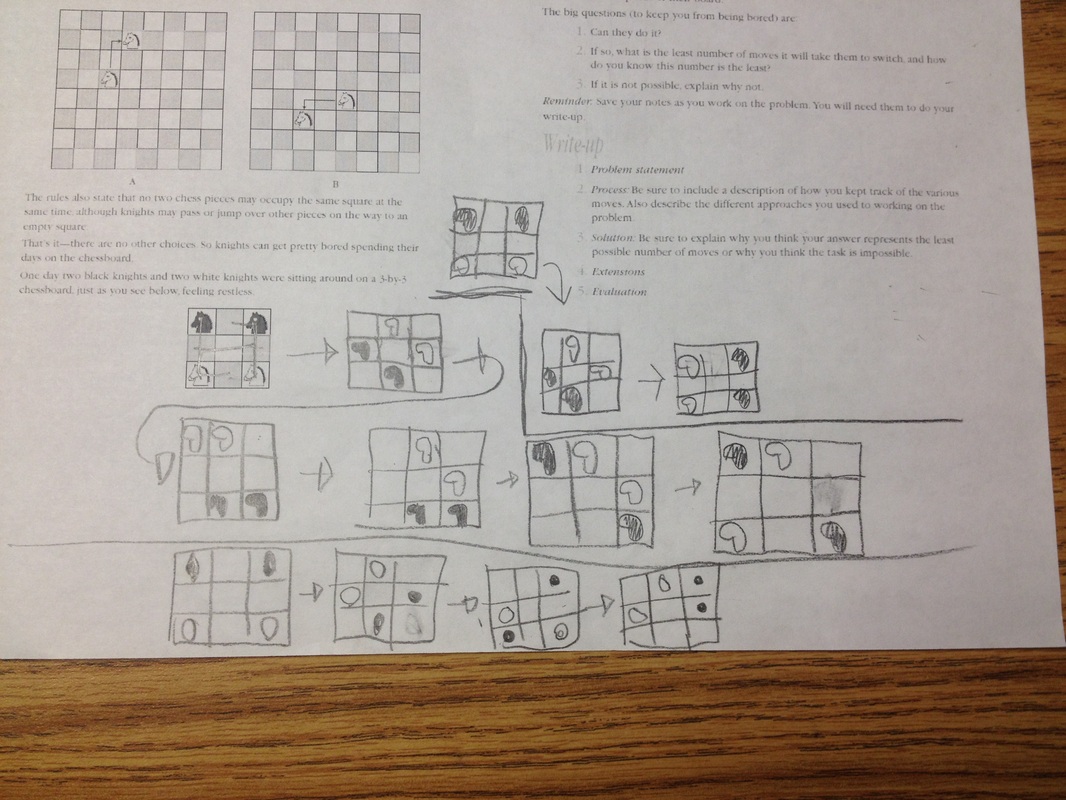